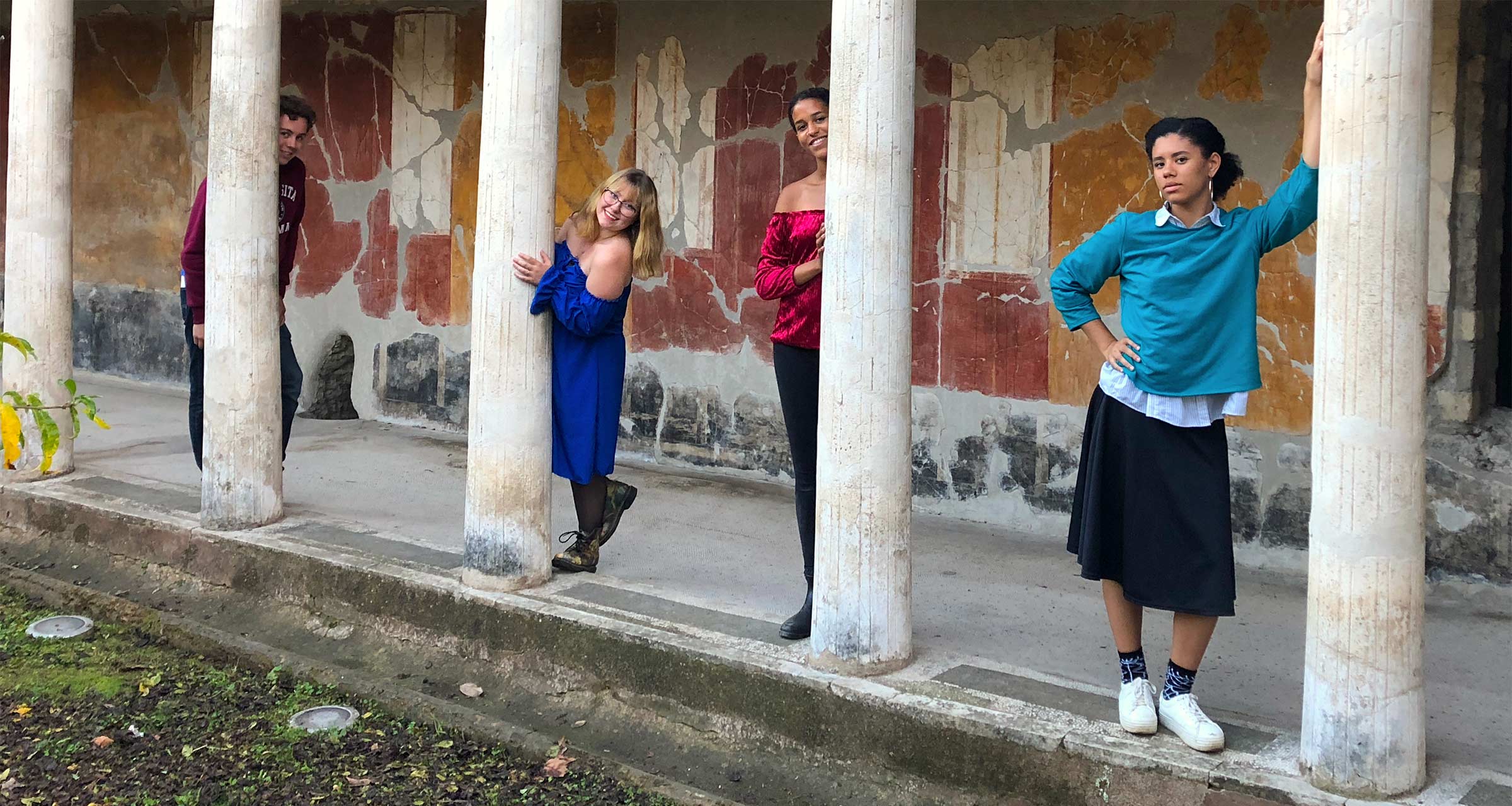 “The Centro will change your life.”
Centristi have been saying it since our founding in 1965. The phrase is undeniably true, and the results take many forms.

For some Centristi, a semester in Rome tips the balance and unequivocally demands that they pursue graduate work in Classics.  The professional fields of Classics, History, and Classical Art and Archaeology are chock full of Centro alumni.  In recent years, Centristi have pursued graduate work at Harvard, Princeton, Cornell, Michigan, Yale, Berkeley, Chicago, and other leading programs.

For others, on-the-ground instruction in Rome stirs a life-long love of Italy, the Eternal City, and the ancient world that they carry into a wide array of fields, from Classics-adjacent areas like museums, conservation, and library sciences to realms further afield such as law, finance, business, and medicine.

Beyond careers, the Centro fosters intense friendships and a network of contacts that endure for decades beyond a semester in Rome. 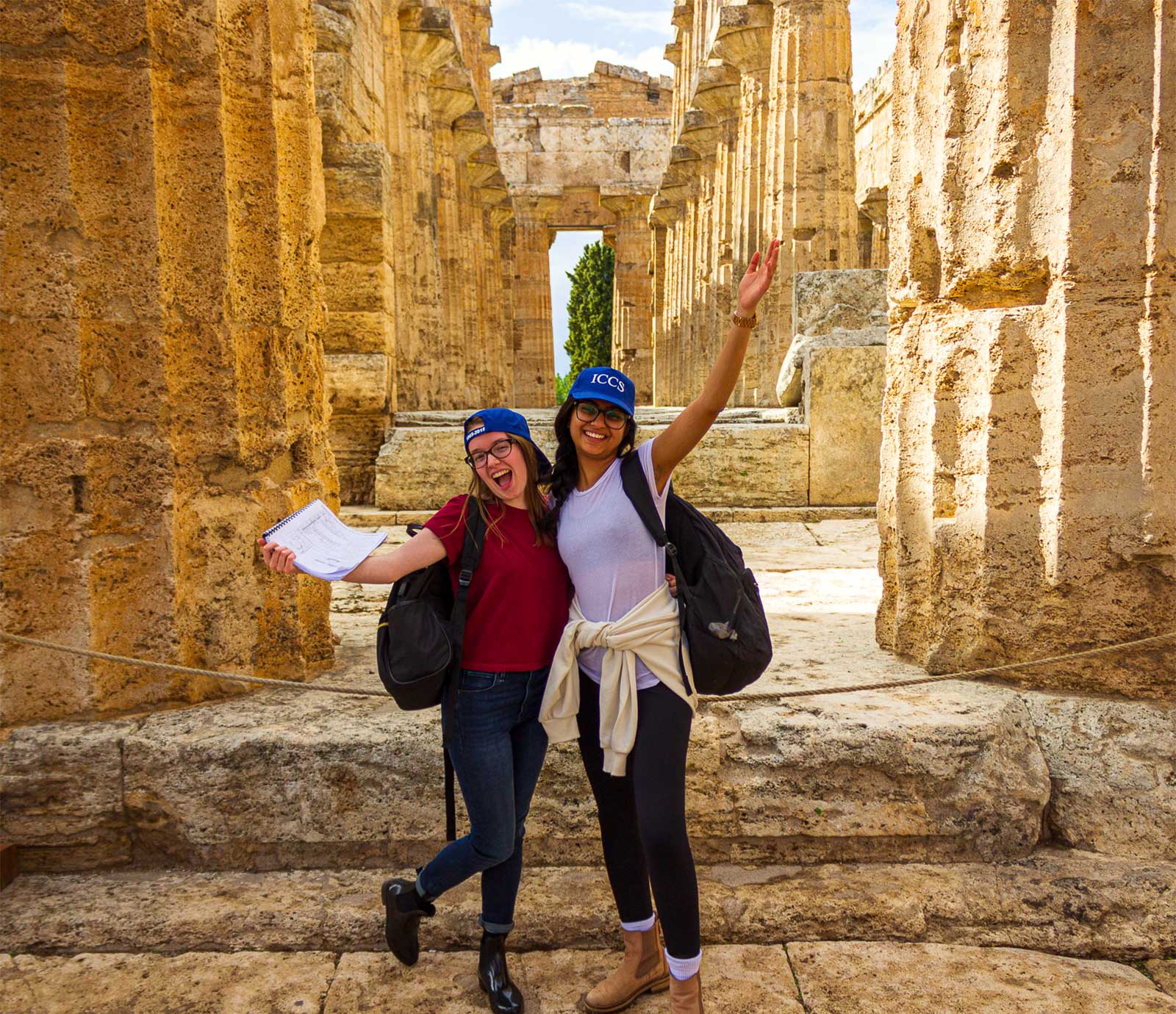 “You will find no other program that builds as tight of a community as the Centro.”

We tracked down 62 alumni from the 2008-2009 academic year.  Here’s a snapshot of their professional accomplishments about a dozen years after their time in Rome.

What do Centristi do after the Centro?
A whole host of rewarding things, it turns out. 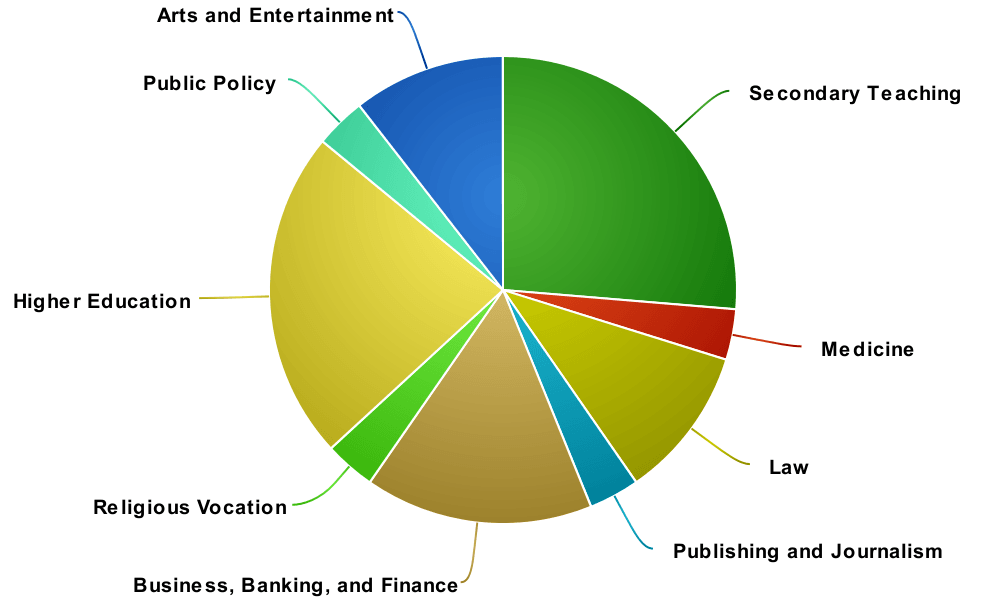 Centristi from 2008-2009 count among their ranks two Fulbright Scholars and one Gates Fellow. And these 62 alumni have earned a total of 60 graduate degrees: 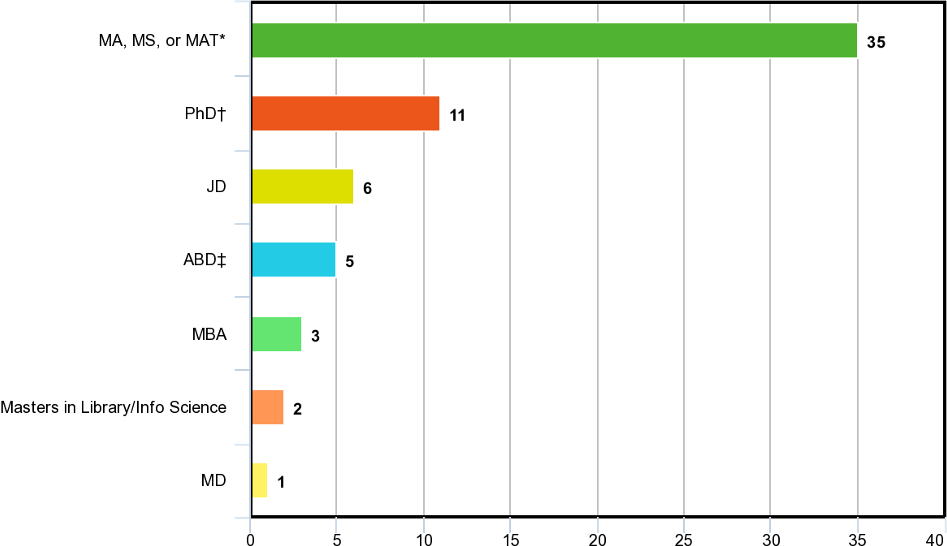 * 5 of these were earned overseas
† Across History, Classics, Linguistics, Psychology, and Religious Studies
‡ We know, not a degree per se 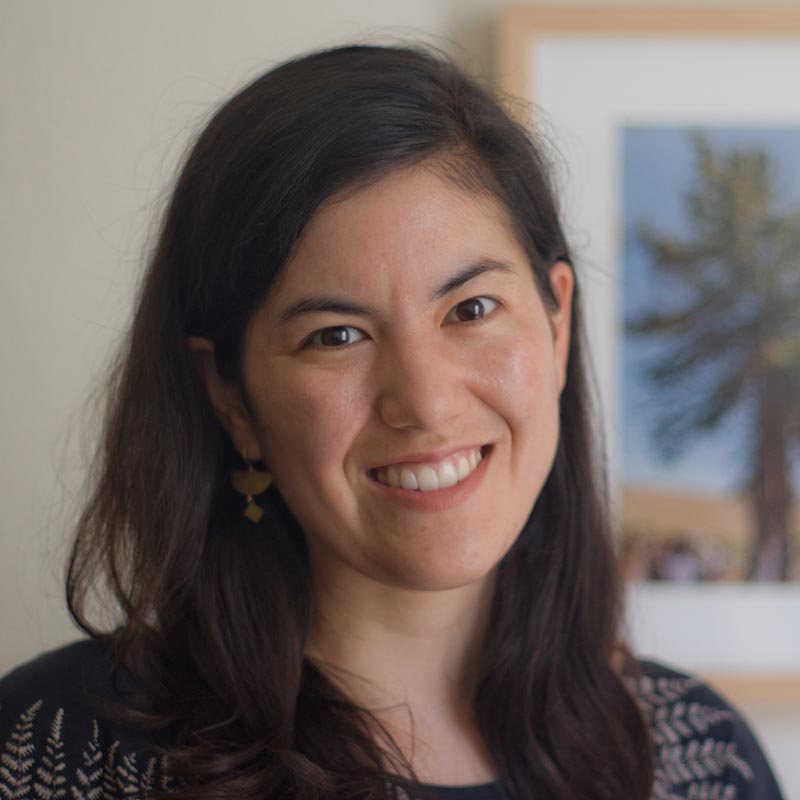 In Rome, the past is very much still present. Everywhere we went, we could see how layers of antiquity, medieval times, the Renaissance, and modern history are all interwoven in the physical city as a living heritage. We would literally see ancient column capitals just lying in the roads like debris. The Centro brought to life what I had considered to be old and dead.

I loved getting to go into the Sibyl’s cave in Cumae! After reading all about her in Vergil’s Aeneid, it was awesome to actually stand in her sandals in the creepy, haunting, beautiful entrance to the Underworld…

I will always think fondly of my after-dinner strolls from our home on the Monteverde down the winding narrow streets into Trastevere and then across the Tiber toward the Campo De’ Fiori. I loved exploring and getting lost in Rome’s little streets, especially in the evening when I could just soak up its beauty and charm, and of course stop for a gelato on the way back home.

What advice do you have for prospective Centristi?

If there is any doubt in your mind about spending your semester at the Centro, cast it out! Those five months were absolutely magical and transformative in my life (and career) and I hope they will be for you, too! 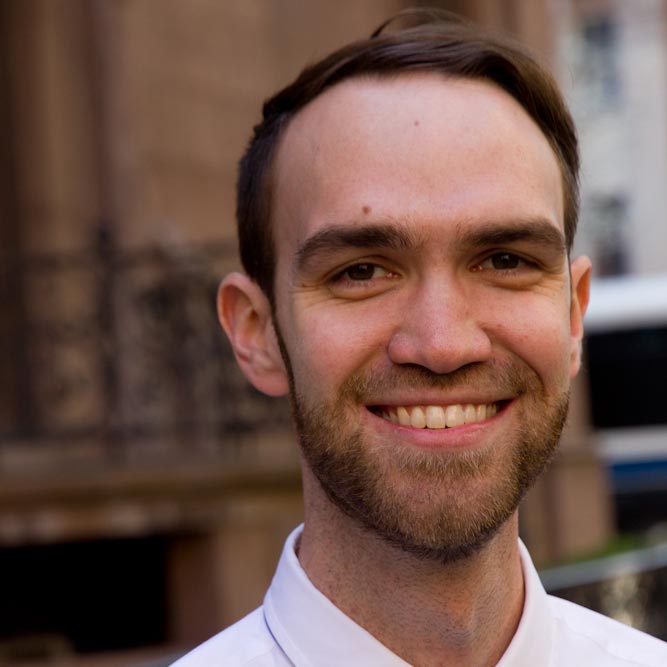 As an editor of Archaeology, I frequently draw upon information I learned at the Centro about the archaeology, geography, and history of Roman Italy that helps me bring ancient history to vivid life for readers.

I still remember being awestruck in the Forum of Julius Caesar and the Forum of Augustus. We were standing far below the modern street level, and it was easy to feel transported to ancient Rome and experience the Roman Empire’s birth. I was truly impressed by the scale of the architecture, which would have been even more impressive when it all still stood.

I look back especially fondly on memories of our home on the Janiculum. Between classes in the afternoon, I frequently enjoyed getting pastries or a gelato across the street from the Centro and walking in the park or to the Acqua Paola, which has one of the best views of Rome. 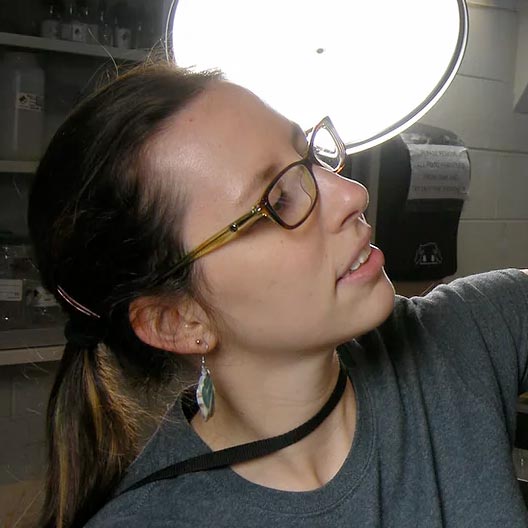 My most vivid memories are of the ancient sites that retain a sense of the architectural spaces as they were thousands of years ago. We visited several that stand out – including Etruscan tombs at Cerveteri and Tarquinia, the Pantheon in Rome, the volcanically-preserved four-story houses at Herculaneum, and some monumental temples in Sicily – but the Basilica of San Clemente tops my list. This astounding building preserves two thousand years of political, religious, and architectural history in its very structure, since successive renovations built atop previous iterations of the building.

What advice do you have for prospective Centristi?

While we all go to the Centro because it offers an excellent program for ancient studies, make sure you don’t miss out on the opportunities to enjoy studying abroad in a living foreign culture. Look for ways to shift your academic load so you can take advantage of the only-in-Italy offerings like the Renaissance Art History class or learning basic Italian where you can use it daily. You might even consider taking a little off your academic plate in order to spend more self-directed time exploring the city. 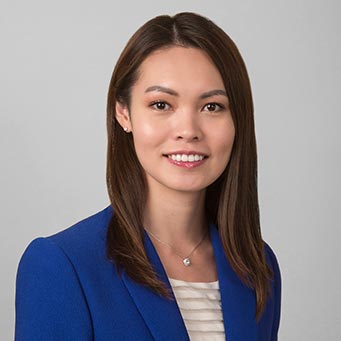 I was hired to work at a law firm after my first year in law school due, in part, to a partner who had unfortunately been denied acceptance into the Centro program, and who wound up attending a program in Athens instead.  I had included the Centro on my resume and almost our entire interview was about my experience in Rome.  I never imagined that the Centro would help secure first job as a lawyer at a great law firm, which has opened many doors for me.

Thanksgiving. It was the most incredible meal that I still dream about, cooked by Centro staff. Most of all, I remember Centro alumni from years past joining us for the meal and speaking about how much of an impact the Centro had on them.

The sculpture of Laocoön and his sons in the Vatican Museums.  Not only did I give a presentation about it, but its impressive beauty stood out all the more in person, especially after first reading the story in Virgil’s Aeneid in high school.  After the Centro, Laocoön eventually became the subject of one of my senior theses in college, and I presented on the topic at research symposia at both USC and UC-Berkeley. 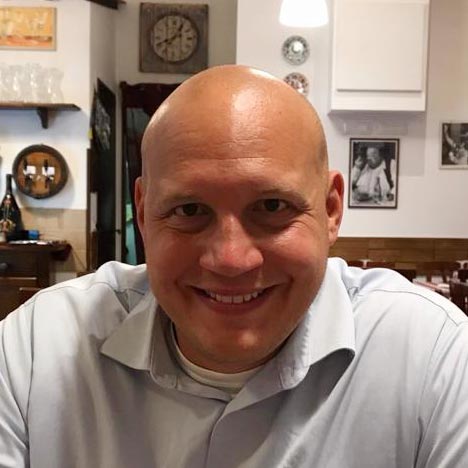 As a Classics professor, I use my Centro experience on a daily basis. This program, and especially the Ancient City course, greatly influenced my approach to ancient literature.  Much of the Centro’s magic is its ability to make the ancient world come alive for students. Our Centro professors taught us to treat the monuments and buildings we visited not as static artifacts, but as active agents in a once-living, -breathing world.

Definitely Paestum for several reasons. The site contains some of the most well-preserved and beautiful Greek temples in the world. On top of that, you don’t have to gawk at 100 yards away behind several barriers and guards. You experience them from the inside. After visiting the site, you head to the museum, which, in addition to other treasures, houses the Tomb of the Diver, a masterpiece of ancient painting. This site allows the visitor to experience Greek, Lucanian, and Roman culture in one day. And you end your day with a trip to the beach and, finally, a dinner featuring the best mozzarella in the world.

The dinners at the Centro. I still remember how excited I would get every night as I skipped down to the dining room. First, there was the food.  Thanks to the Centro’s amazing cooks, the meals are incredible.  And then there was the lively dinner conversations with my fellow Centristi. I remember losing my breath laughing on the regular.

The relationships that Centro students form among themselves persist across the decades, often in unexpected ways.  Here’s the experience of one Centrista, a quarter-century removed from his semester in Rome.

The Centro stands out as my best semester in college. Studying Classics in Rome was exhilarating: it provided deep context to what I previously knew only from books. Outside the course work, the friendships I formed have endured and enriched my life beyond any expectation, both personally and professionally.

Living in Rome and traveling through Italy made me a lifelong Italophile. Over the years, I’ve returned as often as possible, even as a Visiting Scholar at the American Academy.

After grad school in Classics, I pursued other career paths, but my love for the ancient world, which the Centro cemented, stayed with me: I taught Latin through law school, served as a consultant to the National Latin Exam, and helped organize exhibitions of Latin and Greek manuscripts in Washington and New York.

Remarkably, most of my closest friends today are Centristi. Eric Cleary was the best man at my wedding. Jeremy Radcliffe and I manage a venture capital and private equity firm we co-founded. I see Paul Dowling weekly and have watched him develop his passion for antiquarian books into a successful business. Sarah (Commisso) Armstrong and I frequently text.

So the Centro not only helped make me who I am: it also made possible what I do, within and ultimately beyond Classics. What author Mark Helprin wrote rings true for me and, I am sure, many Centristi: Rome, he said, “echoes and echoes, and I’ll hear it until I die.” 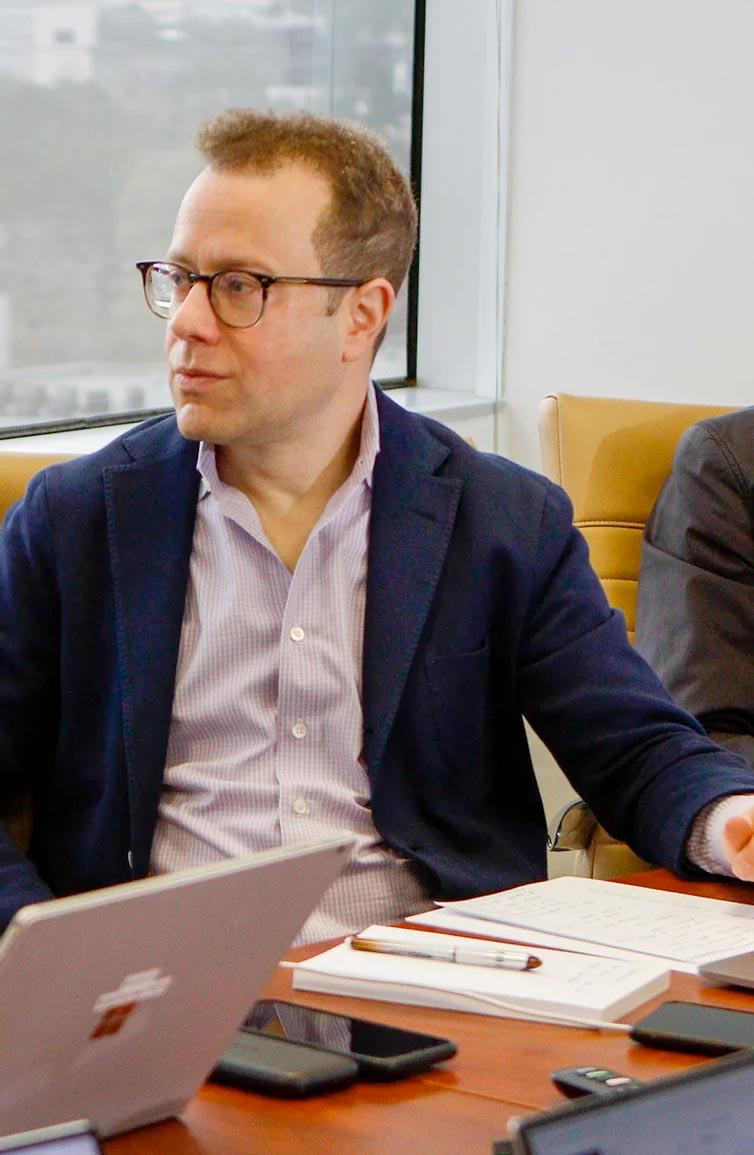